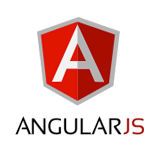 Even though we are calling this applications "Single Page Applications", because we let the browser talk to the server behind the scenes, in the end in many application we'll have multiple "views". For example Gmail has the "list inbox" view and the "show single email" view and probably a few other views.

This is probably the most simple implementation:

We created a variable called page which is actually connected to the $scope, but that's not relevant to us now.

Finall, but what comes at the top of the page, are two buttons. Each one with an ng-click directive that will set the page variable when the user clicks on the button. If you try this page, you'll see you can easily switch between the two pages, or two tabs by clicking on the button.

It is also very easy to add more pages with their appropriate buttons.